Nightmares, Hillbilly Parents, and the Legacy of Johnny Cash

Have you had a chance to watch the mini-series Country Music by Ken Burns? We spent several nights glued to our TV learning a lot about Country Music.  When I was a kid, we never heard the term “Country Music.”  Most of the earlier music was called “Hillbilly” or “Mountain” music.  Somehow the title of “Country” won out over “Country and Western” with Hillbilly taking a back seat.   But “Country” does not represent all of the music of the mountains in Kentucky and Tennessee.

We had proud Hillbilly parents.  They knew how gorgeous the mountains were when compared with the noisy, dirty, cracked cement of the cities.  Mom was from Holly Hill near Pine Knot, Kentucky.  Dad was from Soddy-Daisy, Tennessee.  Both grew up in destitute circumstances.  Mom said that they were so poor that they never even noticed the depression of the 1930’s.  Dad’s childhood home was a log-cabin where rain and snow streamed in on them during storms.  In fact, government money under Roosevelt brought a little affluence to the hollows.

I listened to Hillbilly music every day while growing up in Michigan.  The small green radio sitting on a shelf in the kitchen played all of the time when we were home.  I never consciously chose to listen to Hillbilly music, like osmosis, it became a part of my DNA.  And I have never been a fan of cowboy-boots-stomping guitar-spitting tunes.  But, as a friend said after watching the mini-series, it is amazing how many of the tunes were implanted in our brains.

I have never been a fan of Johnny Cash either.  (My first piano teacher thought he was god’s gift to the world.) Of course, I watched the movie, “Walk the Line,” and could sing along to “Folsom Blues.”  But I always thought of him as an anti-hero.

Ken Burns changed my mind.  Cash was portrayed as a sort of Robinhood of music.  He identified with those in society that were down and out or felt the sting of discrimination.  (Or, he used this as a marketing tool to sell more albums.)  In many ways he was as brilliant as he was obsessed with many genres of music.  Johnny was a thoughtful man but he also fought demons deep inside his heart and mind.  He acknowledges this in a quote, “Sometimes I am two people. Johnny is the nice one. Cash causes all the trouble. They fight.” 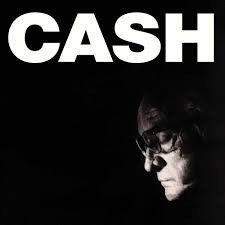 For the past few days I have been listening to some of his celebrated albums.  He won at least 18 Grammys (and scores of other tributes). The first cut that startled me was “The Man Comes Around.”  Written by Cash, this song captures the darkest moments in the Book of Revelation.  It jarred me.  He understands the wicked unfairness of those who are chosen and those who are not.  Here is an excerpt of the lyrics:

And I heard, as it were, the noise of thunder
One of the four beasts saying,
‘Come and see,’ and I saw, and behold a white horse”

The hairs on your arm will stand up
At the terror in each sip and in each sup
Will you partake of that last offered cup
Or disappear into the potter’s ground?
When the man comes around

Hear the trumpets hear the pipers
One hundred million angels singin’
Multitudes are marchin’ to the big kettledrum
Voices callin’, voices cryin’
Some are born and some are dyin’
It’s alpha and omega’s kingdom come
And the whirlwind is in the thorn tree
The virgins are all trimming their wicks
The whirlwind is in the thorn tree
It’s hard for thee to kick against the pricks

Till armageddon no shalam, no shalom
Then the father hen will call his chickens home
The wise man will bow down before the throne
And at his feet they’ll cast their golden crowns
When the man comes around.”

Undergirding these chilling scenes is a piano that marches on the lower keys and makes your heart beat very fast. (What a tune!)  The guitars scratch out a machine-like melody that sounds like a horse coming toward you.  What a wake-up call!  Here is the tune:  “When the Man Comes Around.”

Another chilling tune sung but not written by Cash, is the “Mercy Seat.”  While I am a Biblical Scholar and have written about the Bible all of my career, I was never interested in investigating the “mercy seat” which was the name for the lid of the Ark of the Covenant in the Old Testament/Hebrew Bible/First Testament.

This tune tells the story of a man on death row as he faces the end.  The mercy seat is the electric chair? He claims he was framed but is not afraid to die.  In the end he says, “I lied.”  What does this mean?  Did he lie about the killing or lie about his fear of death?  What a song!  Once you hear it, you won’t forget it.  Here is the tune:  “Mercy Seat.” 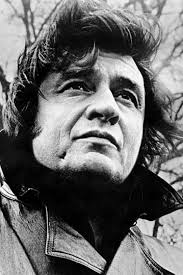 While I did not listen to all of Cash’s tunes, I found most of the tunes he sang later in life to be gritty, violent, vindictive, lonesome, remorseful, and often, pathological.  Dying and suffering are interwoven into the lyrics of many tunes.  Jesus pops up a lot.  I kept wondering what he did in life that made him so hardened, so depressed?  (Maybe it was a persona he created?) His brother died when he was young and according to the Ken Burns film, his father wished that Johnny had died instead of his brother. But there has to be more that is not known!

The haunting sadness in his voice underscores the grieving in many tunes.  “Delia, If I had not shot Delia, I would have her for my wife.”  WHAT?  Then there is a story about gun practice where the main character shoots a rider just for fun.  WHAT?  Mary (an Irish tune) dies one cold night at the doorstep while trying to wake her father.  In the end her baby and the father die also.  An ex con dies on his way home in the highly acclaimed tune, “Give my Love to Rose.”  Cash asks a lover to lie in a field of stones and wonders in another song if he is one of the field of stars in the sky.  (Was he on something? LSD?)  Sandwiched in between some of these songs are questions about sinners and the blood of the lamb and the hymn, “Why me Lord.”  Cash was a complicated divided soul.

Certainly, many of the tunes sung by Cash grew out of real-life circumstances of being exploited, convicted or falsely convicted of crimes, failed relationships, and a hope for redemption.  I wonder if he found it?

While listening to all of this grit and violence, I began thinking about my parents.  Their lives were also punctuated by violence, fear, physical harm, starvation, and lack of opportunities.  Hank Williams was one of their heroes.

My mother did not finish high school because she had no shoes or good clothing, only flour sacks for dresses. She was ashamed.  At twelve my father was yanked from elementary school to work the farm.  A plow horse shattered his arm, an arm he could never use for the rest of his life.  He loved learning but never came back to it.  He faced the awfulness of personal death at 19 when his first wife died in childbirth.

Both of my parents escaped the grueling poverty of the South to liberating factory jobs in Detroit.  (Yes, Detroit saved them.) They did not succumb to drugs, killings, or even an over-powering haunting religion.  They were the lucky ones.   But they still worked day and night to make a life for themselves and their children.

A few years ago, I tried to capture the lives of my mother and father in the South and then in Detroit in the book, “Life Everlasting and the Twelve Mile Blues.” I began to realize the wonderfulness of being born in the South.  Here is an excerpt, 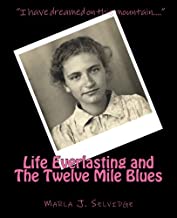 “There is a song that I have in my head that never goes away.  It is a song of the pines and the wind coming through the valley.  It pulls me south to the mountains, to Jellico and Marsh Creeks, to the voices and places that filled my childhood.  There is quietness in those meandering waters and soulful people.  I understand their mountain spirits.  I understand their pain, a pain born out of hope for a better life–a better tomorrow.  It is a mystical sadness that finds itself at odds with the modern world that seems to have lost sight of its own humanity.

Certainly, Johnny Cash would have understood some of what I am trying to communicate above!  If you are interested in reading it, look for “Life Everlasting and the Twelve Mile Blues” on Amazon. Click on the title.

Most of the tunes for this piece were found on the albums,  American III.  Solitary Man (2000) and American IV.  The Man Comes Around (2002).  Photos were not copyrighted and taken from Wikipedia.