“Igor and the Red Elvises” is Published 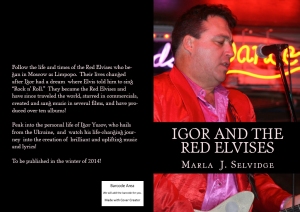 I had just published my book, For the Love of Elvis, having spent over three years developing a university course, “Elvis. Memphis Messiah.” Many of my friends and colleagues thought that I had lost my mind when I started the work on Elvis. Now they can’t believe I am working on a book about the Red Elvises. They think the name is a joke and wonder why a Religious Studies professor would head into the Russian music scene. They ask, “Do you speak Russian?”

So let me continue the story. My spouse and I were looking for some good music for the weekend. He suggested “The Red Elvises” who were featured at a local popular “down and dirty” club, Knuckleheads. I thought, “How silly, how could there be RED Elvises?” And why would Russians sing rock ‘n’ roll? The two did not seem to go together in my mind. But I went to the concert anyway. From the first song to the last, I was blown away with the creativity of the group. They were dressed in outrageous costumes and engaged the audience in ways I had not ever seen. They were almost like traveling evangelists! Their message was “happiness.”

The music was astounding. Yes, it was rock ‘n’ roll but it was more. There were songs about Jesus, condoms, space guys, prostitutes, cowboys, disco, sex, night butterflies, and so much more. Igor was combining Jewish traditional melodies with hillbilly tunes. Who was this guy? Why does he sing “Scuba doobah doo?”

We bought a couple of their CD’s at the concert. But after the concert, I continued investigating the music and ended up buying all of the Red Elvises’ CD’s. I thought everything was brilliant, even their CD covers. Some of the tunes were a bit earthy but the music made them work.

I emailed Igor and told him that I wanted to write a book about him. No answer. I emailed him again, and he said that we could talk about it when he came to Kansas City again. I prepared an outline for the book and inserted it into my latest book “Demimonde. The Other Story.” I gave it to Sarah Johnson, a member of the band, and asked her to give it to Igor. No answer. 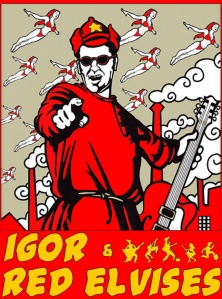 The concert continued and they took a break. During the break, I caught Igor’s eye and told him that I thought he was brilliant. Could we talk about a book? Finally, he agreed to talk with me after the concert. He told me that he had been thinking about a book about the Red Elvises but it seemed like such a huge project. And that was the moment that he agreed to allow me to write a book about the Red Elvises. I was going to start the book in about a year because I had other projects to do but changed my mind. For some uncanny reason, I felt as if I needed to begin the research and interviews immediately. And, so, the only way I could interview Igor was on the phone. He is either on tour in the United States or Russia, visiting the Ukraine, or vacationing in Thailand. It was very difficult to schedule interviews, but we had conversations almost every day, for many months, while he was home in Venice Beach. I can’t count them.

While I had written about Elvis, of course I could not interview him. (Oh, how I wish that was possible!) And I had written many academic books in the past, but I had never developed a book about a dance band. This was new territory. But gradually, Igor and I talked about a lot of things. In the beginning, he was hesitant to talk about anything personal. As the months progressed, he began to trust me and told me many things about his childhood and the birth of the band. Often, I would ask a question and Igor would say, “That is too personal.” He would never talk about relationships with friends or companions. So this book certainly will not be a tell-all book, even so, I eventually discovered stories about his family and his love for them. 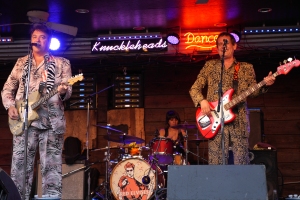 He pointed me toward Russian poets and writers. I began to discover the history and travails of the Soviet Union and its breakup. These writers enriched my life. I watched movies where the sound tracks were created by the Red Elvises. I watched everything I could find on the net. I scoured press releases and stories about the Red Elvises. I analyzed the lyrics in the music. During the research, Igor would point me to a Russian group or author. He would have to write the name or title in Russian in an email, and then I would do a Google search and translate the piece. Some of the translations are a bit awkward, but they were the best I could do. I watched and discovered recording artists that I never knew existed. Many of Igor’s tunes are parodies of other songwriter’s hits or styles. Tom Waits is amazing!

This book is not meant to be an objective portrayal of the Red Elvises. As I spoke with Igor and wrote this book, it became a very long conversation and I tried to capture/translate his life so English-speaking people would understand his story. His voice is contained in quotes and sometimes summarized, but at times I interject my opinion and experiences because I think it will be helpful to the audience. 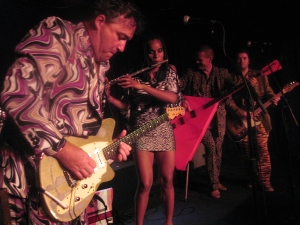 I contacted several previous original band members and people associated with the Red Elvises at one point in time, so that I could write a more objective view of Igor and the Red Elvises. Unfortunately many of those people chose to remain silent. They had good intentions of contributing to the story, but their schedules were often too full. As one past member said, “I had to disappear Hollywood style.” Igor requested that I use only first names.

Early in Igor’s career he married a woman who lived in the United States, Asha, but the marriage did not last long. He has a son, Nanduh, who is now living with him. His mother’s name is Fernanda. Nanduh has a job and is playing a guitar and writing songs and sometimes helps Igor with computer issues. Like his father, he is multilingual, speaking both Portuguese and English. He has been more than helpful in finding, scanning, and sending older photos of Igor and his family. Thank you Nanduh!!! He sent me a copy of 1994 ticket to the World Cup in San Francisco when Brazil played Russia! His mom was originally from Brazil! What a day this would have been for Igor and Fernanda.

The tunes created by Igor have brought a little sparkle into my life. Shortly after I began writing the book on the Red Elvises, I retired from my long time job as a professor. Both Elvis and the Red Elvises, through their music and their lives, encouraged me to seek freedom. And like Evita sang, “I chose freedom.”

My thanks go to Cindy Valla who donated her time to help proof this book. What a friend she has been! 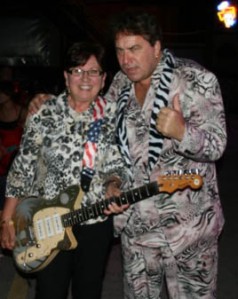 The book with black and white photos will be available on Amazon within a week or so.  I plan to also upload a version and publish the color photos as a deluxe edition.  That edition will appear about a week later.

Soon, I will be back to my critique of higher education.  My next blog will take up the issue of protecting students on campus from disease.